Let’s talk about ghee. It’s something that I’ve only really just begun learning about and appreciating. I made my first batch today and I am very pleased with it. It has a lovely, concentrated, nutty buttery flavor, and it’s great for all sorts of cooking!

So, what is ghee? Clarified butter. Plain and simple. The milk solids and water are evaporated out of the butter which leaves behind only butter fat. Yum.

Why do you make/use ghee? Ghee has multiple uses and benefits. First off, the taste of ghee is comparable, but (in my opinion) much better than butter. It can be consumed by those with lactose intolerance. It also extends the life of butter and increases the smoke point up to 485 degrees!

How do you make ghee? The process is very simple. Cube some unsalted butter and melt it down in a pot over medium high heat. Allow it to boil until a froth forms on the top, then keep it boiling until the first froth goes away and a second froth forms. Once this second froth has formed, the ghee is ready. Allow it to cool slightly for a few minutes, then pour it into a fine strainer lined with cheese cloth to strain the solids, and store it away in a jar. No need for refrigeration, fresh ghee can be stored at room temperature for around 3 months, and in the fridge for a year! Use it for cooking or pan frying most anything.

Other tidbits – don’t use salted butter as the salt will concentrate and you’ll end up with an INCREDIBLY salty ghee that is not palatable; ghee can be stored in the freezer, further extending it’s shelf life; ghee is a paleo-accepted dietary fat. 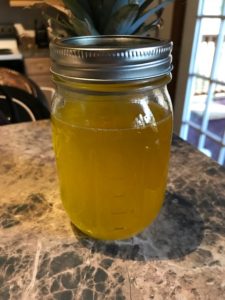