Well, my cheese making experiment was a total success. I ended up making a solid block of ‘farmhouse cheddar.’ It is definitely a more involved process than I had realized, and I do lack some of the proper equipment, regardless my end product was most certainly an edible, yummy cheese.

The recipe/instructions I followed are here.

Let me just start out by saying that I modified the recipe from the start. Instead of doing 2 gallons of milk, I only did one. I used raw milk, however I did go ahead and add the calcium chloride to help it set up/thicken. It worked well. I kept following the directions, however when it came time to cut the curds, I definitely did not cut them properly. I ended up with some very long curd chunks, but I don’t think it made too much of a difference. 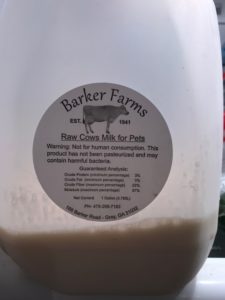 My next issue was heating & holding the curds at 100 degrees indirectly. Our water doesn’t get very warm, and my thermometer isn’t the best, so that was really a guessing game. It also didn’t take as long as what the recipe indicated, so I’m sure I did it wrong. 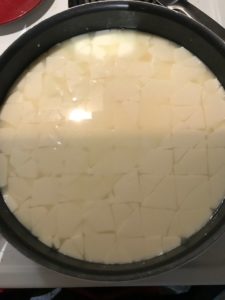 When I drained them, I lined the colander with cheese cloth, sat it over a large bowl, and then covered it with one of the metal stock pot lids I have (to keep flies at bay). This worked very well. I added the salt and mixed everything by hand, which was fun. 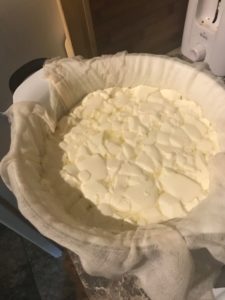 Then came time to press. Luckily I had purchased a mold when I bought my rennet and other supplies, however, no cheese press. I improvised. I used rocks to press the cheese. For the second press, I only pressed it for 8-9 hours instead of the full 12 because I was worried about flies during the day while I was at work. And I am certain I didn’t use the correct amount of pressure, but whatever it still worked.

Instead of sitting the cheese out in the open, susceptible to the flies, I covered it with a breathable cover and set it out for the day while I was at work. When I came home, I put it in my ‘cave’ (wine cooler that my rabbit proscuitto is curing in). I turned it 2x daily until Friday (so was in the cooler for 4ish days).

One of my long lost best friends visited Friday night, she was driving home from the beach to Chicago and stopped for the evening. I thought it was the perfect time to test the cheese. I made a modest cheese platter with some olives, brie, stilton, and my cheddar, coupled with some glasses of pinot, and we indulged ourselves on the back porch.

It is not an exaggeration that I had tears in my eyes as we tried the first bite, and, surprisingly, it tasted like cheese! It was a bit crumbly, more of a feta-like texture rather than a smoothness like typical cheddar (due to improper pressing), but it also had a slight nutty and salty taste reminiscent of yummy cheddar cheese. The rind was a dark yellow and smelled musty and delicious. We both enjoyed it. I was just happy that I had actually made cheese successfully (lots of my kitchen experiments don’t turn out well). I am so happy! 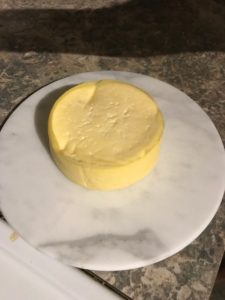 I will definitely continue to experiment with cheese making, I also have some thermophilic cultures to test out (maybe mozzarella). Excited for my next batch!